As you can figure out by now, I fell in love with this country. I want you all to have the same experience I did, so please read my exact itinerary. See what you want to replicate or what you want to tweak. I’ll add comments if I liked what we saw or not.

We departed Chicago around 3:40 P.

After a connection in Paris, we got to Casablanca around 4 P. Then, we took a megabus to Rabat, which is about an hour and a half away. We got to our hotel and relaxed the rest of the night.

For the majority of the day, we explored Rabat and then was en route to Fes. The first place we visited was the Royal Palace, which was a quick photo opportunity. You can’t get too close to the palace; it is actually sectioned off. So if you don’t have time, go ahead and skip this part.

Next, we went to the Oudaya Kasbah. I forgot the history and significance of this. However, when you go inside there are so many side streets painted in Fes blue. It is really pretty. Great photo opprtunities.

Then, we went to the Chellah Ruins. It was my favorite part of the day. This used to be a fortified Roman necropolis. If I remember correctly, some of it was destroyed by the 1755 Lison earthquake.

Last in Rabat, we stopped by Hassan Tower, which is a large Mosque/ Mausoleum. There are four royal guards on four sides of the mausoleum in this giant square. Muslims pray here every Friday (be mindful, it might be closed on Fridays to non-Muslims). It is so beautiful here due to its vastness and grandeur.

En route to Fes, we stopped for a tour with a local guide in Volubilis. The ancient ruins from the Roman empire were great. It was like walking into another town, because the Roman’s modeled it after their architecture. I enjoyed this pit stop very much, and again, there were a lot of photo opportunities. Also, there was a lot of walking too. 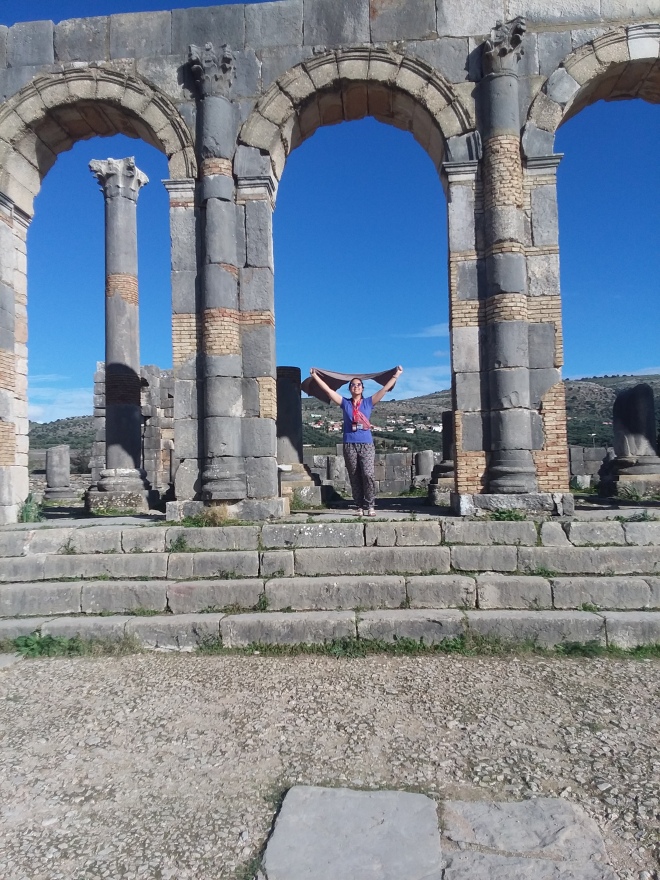 We arrived in Fes and then rest for the remainder of the evening.

This day was a free day for the tour group or a full optional tour day. We opted for the full optional tour, because it takes you into the medina (oldest part of town). Out of every thing in this trip, I love this day the best, because it was the most authentic part of this trip. We walked through the entire medina, going through the schools, passing the mosques, tanneries and carpet stores. Every one we passed was working and going through his life.

Afterwards, we stopped by the Royal Palace. There are a lot of details and colors, and if you want a good photo, take it here. Unlike the palace in Rabat, you can go straight to the door. This is one highlight of the trip.

Lastly, we made a quick stop to the Jewish cemetery. I didnt care too much for this, but I know why the local guide showed us this. He was trying to show Morocco is a tolerant country of all religions.

We woke up early to drive to Marrakesh. This was the longest drive on the trip. It took about 9 hours to get to Marrakech. We got there early enough to enjoy the evening in Marrakech as a free day. There was an option to take a dinner and horse carriaget tour, but we didnt care for that.

We walked to Jamma el-Fna, which is a large marketplace and went souvenir shopping. Afterwards, we went to Cafe Argana and got a great view on the terrace. Wait there until the end of the fourth call to prayer. The whole market lights up for the evening and the market really comes to life.

On this day, we again opted out of the optional tour and took it easy. Instead or waking up too early, we lounged around a bit. Then, we took a nice walk to Jardin Marjorelle or Yves Saint Laurant’s vacation home. This is another highlight, and you should go there. The contrast between nature’s green with the vibrant blue (aptly named Yves Saint Laurant blue) makes for another great photo opportunity.

At night, we went to the market to try some street food. There are so many vendors to choose from, but I wanted to try B’stilla so i went with the first one that had it. So good!

We went to Casablanca, which was only a 2 hour ride. The first spot we went straight to was Notre Dame de Lourdes Cathedral, which I was indifferent about. It was a little plain in my opinion.

Then, we made a quick pitstop to Mohammed V Square. That was pretty spectacular; It was loaded with pigeons. I wouldn’t spend more than 10 minutes here for a couple of pictures and then move on.

Onwards, we went to Hasan II Mosque. This is a MUST–SEE. You will admire how huge this is. Sometimes muslims cannot afford to travel to Mecca, so they go to this Mosqie instead, because it is the third largest mosque in the Middle East. You will be really impressed.

Our final stop was Corniche seaside. It was very different from urban Casablanca, less litter and traffic. A lot of foreigners live there, so it isn’t real Morocco to me. However, I really liked it here too. It is very relaxing and reminded me a bit of Santa Monica Pier.

We drove 45 minutes to get to the airport and arrived to Chicago 18 hours later.

Alright, I hope that helps you plan your trip. I would categorize this itinerary as very fast-pace; We made a lot of stops and drove around a lot. If you would like to slow down your vacation, I recommend you only visit Fes and Marrakech. To me, those cities left a lasting impression